Souvenirs at the Woolworth’s on Main St., Fredericksburg, Texas.

My friend  Alysia,  an Italian-American from Old Forge, PA  had moved to Texas. She had met her fiancee, Clay, who was in the Navy, on a June weekend in Scranton when he was in for a mutual friend’s baby shower. Clay was living in San Antonio at the time, and this whirlwind, romantic weekend soon led to trips out to Texas, a move leading to a May 2014 wedding date. They decided to get married in the Texas “hill country” in Fredericksburg, a quaint town of 10,000 that Alysia had come to  love. This would be my first trip to Texas, although I hesitate to say I have been to  Texas, having only spent a night in San Antonio (embarrassingly not even having time to see The Alamo) and three days in Fredericksburg. Still, I got a glimpse of why this state lives so mythically in the imagination. The landscape alone, full of wide skies and endless stretches of road, speaks of expansion and opportunity.  Texas is the second largest state in the United States in both size and population,  and with a complicated history of land acquisitions and merging culture, s lends the state many unique and complex legacies. The Bride and Groom dancing at the Thirsty Horse Saloon in San Antonio, Texas.

One of these legacies is dancing, which is very much at the heart of Texas culture. So after a tour of the famous San Antonio River Walk,  we Pennsylvanians were escorted  to the Thirsty Horse Saloon a popular place to dance Texas style.  One of the groomsmen, and our host, was born and raised in  Texas. He spent some time patiently showing us the Texas Two Step and giving us some history. Dance halls were constructed in  Texas immigrant farming communities by German, Czech and Polish population who emigrated in the 19th century. Originally it would have been polkas and brass bands most likely playing, but in the 20’s Bob Wills developed Western Swing and then in the 40’s Hank Thompson, Ernest Tubb and Lefty Frizelle created Honky Tonk and gradually what we think of as Texas County music emerged. So there I was in a contemporary Texas dance hall feeling sheeplessly Pennsylvanian with my sneakers and uptight east coast vibe being led around a dance floor myself next to men and women decked out in glittery cowboy boots (Texas glitter I was told) gliding effortlessly and magically under the silver lights. But as I tried out the quick-quick slooow quick quick- slooow steps said to have emerged from the Waltz and Foxtrot I understood how dancing could become a way of life.Heading out to Fredericksburg the next day we got caught in a hail storm that came completely out of the blue. Our driver and fellow bridesmaid reminded us that “They say if you don’t like the weather in Texas wait five minutes and it will change.”  This proved true after being pelted by golf ball sized hail the sky calmed and soon we were driving into a big, blue sky flanked by green gentle hills populated by Live Oak and Scrub Brush. Fredericksburg, named after Prince Frederick of Prussia is the seat of Gillepsie County and  arose as part of the Texas land grab in the 1840’s when a business slash philanthropic group, The Adelsverein encouraged a mass emigration to Texas for economic relief of the German Proletariat, with the hopes of establishing new supply markets for Germany as well a freedom. Life for  those early German settlers was not as easy as perhaps they were promised.  And  as  with much of the history of the United States, there is tumultuous past, including conflict with the Comanche Indians, which luckily ended with a peaceful 1847  treaty which did not take away rights from the Penetaka Comanche. The German identity remained strong in Fredericksburg and the language spoken here became part of a unique “Texas German” consisting of between five or six different dialects.Today the town is a wine focused tourist destination with charming shops and restaurants along its Main St. Before the rehearsal dinner we hit  Fiesta Winery where I sampled some nice chocolatesque Port. We also hit some more of the shops on Main St. including a classic Five and Dime and we all pondered buying a pair of cowboy boots to bring some Texas Glitter back home. The rehearsal dinner night was held at the family farm of our dancing  Texas groomsman, Fredericksburg Farms. Fredericksburg Farms the site of rehearsal dinner.I got to sample some of the local flavors including Shiner Bock, the classic Texas beer that paired nicely with venison sausage and an amazing delicious roasted Raspberry Chipotle Sauce created and sold by Fredericksburgs Farms. It was mixed with cream cheese and I could not get enough of it. Luckily, I did leave room for the Cajun Shrimp Boil that followed and homemade Whiskey Bread Pudding.There was more dancing and stories were shared about the Bride and Groom late into the night.

The next day was warm with a blue sky for the wedding which took place at Admiral Nimitz Museum. (Admiral Nimitz the fleet admiral who led U.S. forces to victory in the Pacific during World War II was born in Fredericksburg. )

I said in my toast that  one of the things I love about weddings the blending of communities and the forging of new friendships. And this proved true with the great mix of northeastern, Pennsylvanians, Texans and relatives from other states around the nation.  I remarked on how much the Texas landscape was a great metaphor for marriage, with its openness, sense of possibility and many wide open roads to explore together.   We enjoyed the Texas barbecue of Brisket, macaroni and cheese. And danced and drank more Shiner Bock and danced and talked late into the evening.The next day we all enjoyed a classic  Tex Mex Breakfast at the Java Ranch on Main St. where I ordered the Huevos Rancheros and poured myself  some of the coffee Texas Italian Roast coffee to help me wake up from the wedding festivities, which I felt a very  fitting beverage to top off the the Italian Texas wedding. 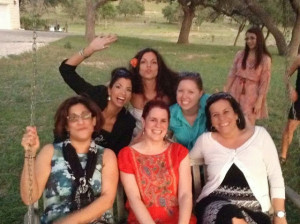 Hanging out the Ranch. The Bride and some of the Pennsylvania brigade relaxing at the Rehearsal Dinner at Fredrecksburg Farms.

← Prev: The Sky in a Glass: The Aviation Cocktail For an Industrial But Cozy Space with Great Coffee Try Washington D.C.’s Chinatown Coffee Co. →