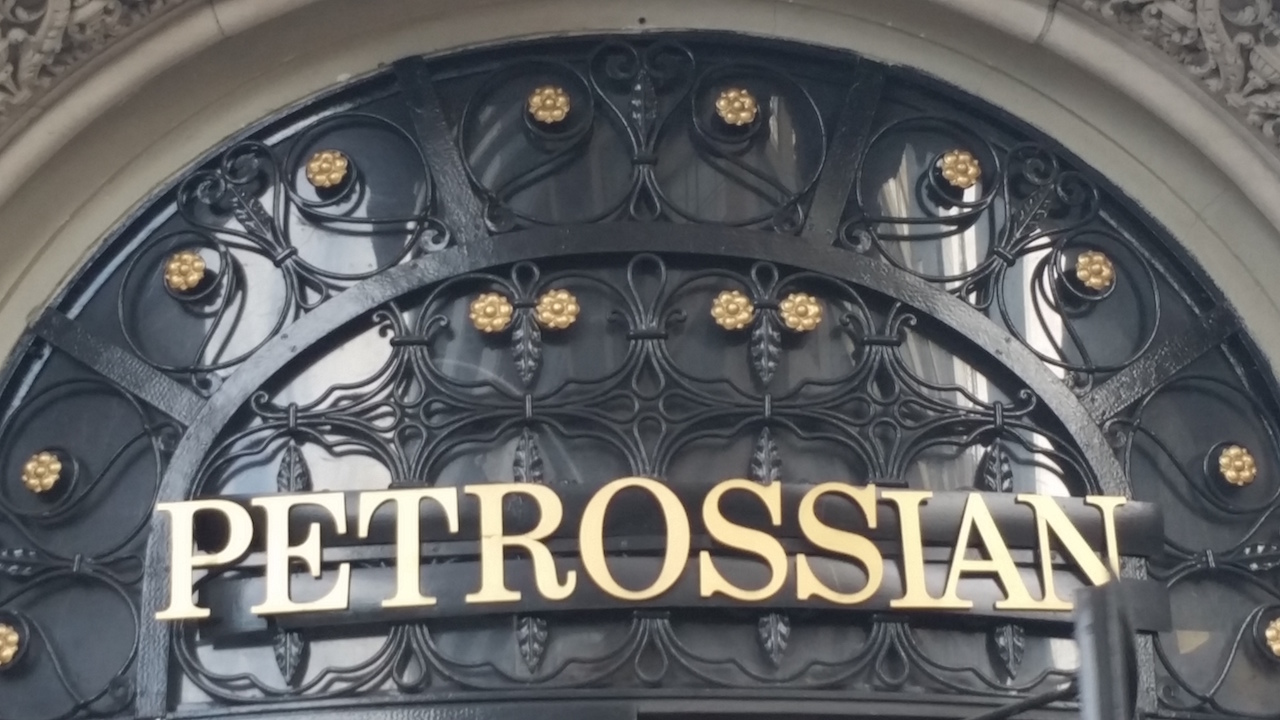 Certain establishments for me are synonymous with certain beverages. My favorite place to sip sparkling wine is definitely Petrossian in New York city located on the edge of Central Park at 182 West 58th St. at 7th Ave., near Bergdorf Goodman’s, one block from Carnegie Hall and four blocks from Lincoln Center.   Petrossian maintains a refined authenticness that provides a superb luxury experience, but with a humble and gracious attitude and ambiance. A rare balance to achieve.

Founded in 1984 the restaurant is housed in the historic Alywyn Court building. Built in 1909 the building featured true luxury family apartments in the gilded age style and was marketed as  a “city home for those with country houses.” The building was inspired by the architectural style of French king Francois I (1494-1547),  a great patron and lover of the arts, who built many elegant châteaux in the Loire Valley in France. His emblem was a salamander which were believed to have the power to live through fire. A carved salamander sits above the entrance to Petrossian.

The restaurant, serving French-Russian influenced cuisine, was an off-shoot of the successful world renowned Petrossian Caviar Company founded by Armenian brothers, Melkoum and Mouchegh Petrossian who emigrated to Paris in the 1920’s where they acquainted the French with the pleasure of Russian caviar and  founded the company that today is the premier buyer and importer of Russian caviar worldwide. A glass of Yves Lambert Crémant de Loire at the bar.

Petrossian is the epitome of old world elegance. The restaurant was designed by Ion Orveanu (1927-2014)  a Romanian film and theater designer. The  beautiful decor and the inviting staff create a sanctuary from a world that increasingly asks us to move faster and faster.   It puts the attention on the simple and timeless, versus the trendy.  I love to sit at the pink Finnish granite bar and order a sparkling wine with an appetizer or two. Maybe it is because a tall glass of bubbly goes so well with the glamorous Erté women in the mirror behind the bar. Erté, the pseudo name of Roman de Tirtoff, was a Russian born French artist and designer who worked in many fields including costume design for opera, ballet and film. and theater, jewelry, and graphic arts but was probably best know for his  iconic Art Deco fashion design. Erté’s women invite you to linger. To discuss the finer things in life. To indulge in that ultimate luxury-time. I toasted my friend Nezka on her birthday at the bar a couple of years ago with a sparkling rosé, and  it is a favorite spot of my mother and I when we need a light repast and libation to rejuvenate us from a busy day in the city.  On my most recent trip, I ordered  delightful Yves Lambert Crémant de Loire. Crémant means French for “creamy,” and is French sparkling wine made outside of the Champagne region, but which utilizes the traditional “méthode champenoise” (where a second fermentation takes place in the bottle to produce bubbles). My mother enjoyed a Napoleon Rosé Brut. The bartenders are always exceptional. Our bartender that day, Elton, was a great conversationalist. We discussed a variety of topics from engineering, art, New York restaurants and his country of origin, Colombia. He also had a knowledge and a passion for the menu, always a sign of a high class establishment. My Mom and I split  the Yellow fin Tuna Tartar with crushed avocado, scallions, cilantro and a ginger chili miso sauce. A melt in your mouth experience, all of ingredients melded together in symphony of taste. Wanting something sweet to cleanse the palate, Elton recommended we try the fromage blanc mousse and strawberry ice cream with ginger compote.

Petrossian also has a boutique around the corner where they sell many of their specialty  such as caviar, chocolate, cheese, fois gras, cheese and tea and coffee.  Another fun thing to do is buy some chocolates and take a stroll through Central Park with a friend. Then take a rest on a bench, enjoy the conversation and sylvan scenery. Then head back to the restaurant for some sparkling wine. If anything, New York’s Petrossian restaurant and products encourage us to slow down, relax and to taste life fully. At the end of the day isn’t that what we all hunger for?

← Prev: The Brandy Alexander The Exquisite, Sensual Chaos that is Rome →